Pelessa School, a “difficult” school north of Ahangama, is something of an oddity, in that there are some twenty children in both Grades 1 and 2, and then no other children except three boys in Grade 5. Though small, the school had an air of true purpose about it when Robert and Newton visited this July, and it was a “no brainer” to agree for every child to have a daily “meal” as of the start of next term in September. 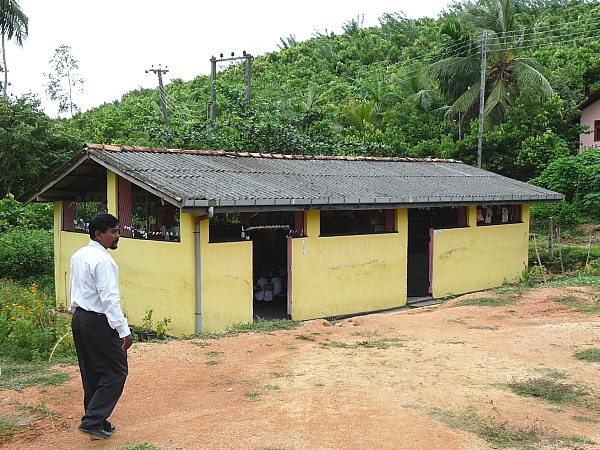 Half a dozen members of Brighton College’s “Trip 2” spent a thoroughly enjoyable morning teaching the children (the Grade 5 boys were allowed to spend some time in the Grade 2 classroom and show off their superior knowledge) and it was during the morning that Robert addressed an unusual request from the principal and teachers.

It appears that the girls, when using the toilet, have been receiving unwanted attention from “bad men” who find their way onto the school premises via the thick surrounding jungle. Would Extra Cover be willing to put up a fence to deter such activity, the staff asked?
Robert suggested an alternative and less expensive option; that the toilet block be re-ordered (a passageway blocked up, a doorway created) that would mean that no activity could be seen from the forest. The principal agreed to investigate.