Below is a bare bones description of the two trips made to Extra Cover schools this July. See the separate article – “Rewards and Rambutan” – for a more reflective description.

On June 30 this year, barely 24 hours after the end of term, eighteen Brighton College pupils and four teachers left Heathrow to spend a fortnight working in the Extra Cover schools of Sri Lanka.
We landed in a rainstorm to be greeted by Newton but by the time the bus dropped us off at our Unawatuna hotel (where Sally and Trevor Andrews were already installed) the sun had appeared behind the clouds. It was an omen, heralding not only a mostly sunny two weeks but also a highlight of many of the pupils’ and staff members’ lives.

The first day was spent getting over jet lag and exploring the neighbourhood (teacher Ben Frier led what can only be described as an “adventurous” hike from the Unawatuna temple towards (but not to) the Peace Pagaoda near Galle) while Robert and Sally and Trevor went to Bembada School. Here, one of the classrooms has recently been designated as home to a Montessori School that has move from a site in the village. Amid much jollity and colour Fr Robert dutifully opened the new Bembada Extra Cover Pre-Prep. 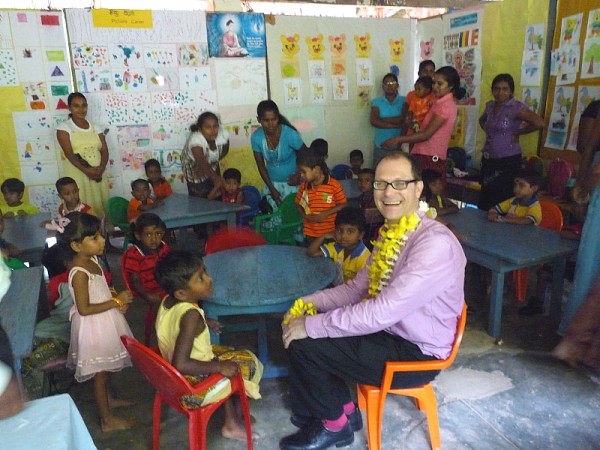 The “working days” of the trip fell into a simple pattern; an early breakfast, followed by everyone piling into two vans (or Newton’s car) and going into the jungle to work. Returning to the hotel mid-afternoon, there was time for some R & R before a 6pm meeting (the “Lucky Tuna” on Unawatuna Beach was more than happy to accommodate 22 people for drinks – and sometimes food – every night) and then supper and bed.
With Tuesday being a “poya day” and the schools closed for the Buddhist observance, we spent our time clearing weeds from a couple of our “tea gardens” at Pathawelivitiya and painting the tables and chairs of the village school. We all sampled the generosity of the school principal Mrs Jayanthi, whose hospitality was unparalleled and whose dhal was simply heavenly. 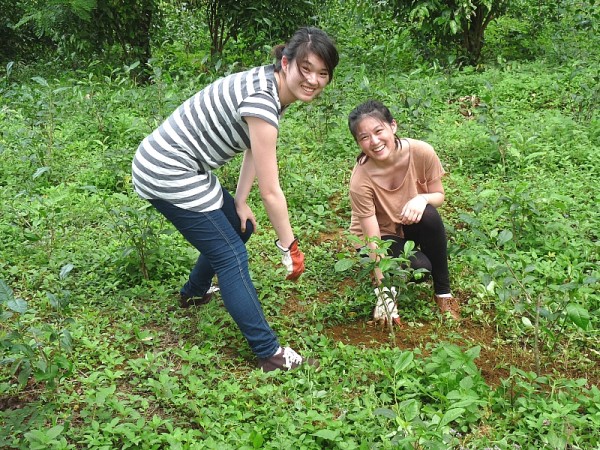 The Brighton College pupils were here to work, and all came with lesson plans and ideas, especially to help the Sri Lankan children develop their English. They also were ready to roll up their sleeves and do whatever manual work was required. Today, half the crew started work on redecorating the new Montessori school at Bembada while the other half taught at Nawala School. Lessons were taught both in and outside the classroom, and ranged from anatomy to the royal family, playground games to mathematics.

Yattalamatta School boldly agreed that we could run a day-long English camp, comprising:

• assembly
• lessons taught “horizontally” by year group
• lessons taught “vertically”, with pupils from all grades in the same room. The whole
school was divided into four colours (red, yellow, blue and green).
•“Competition” and prizes

The theme was “Sri Lanka’s Got Talent” and after some age-specific lessons until morning break, the rest of the day was spent preparing and performing a musical piece, a piece of drama and a group “talent” – all in English. The event was extremely well-received by the pupils and staff, and acted as a template for several of the teaching days to come. 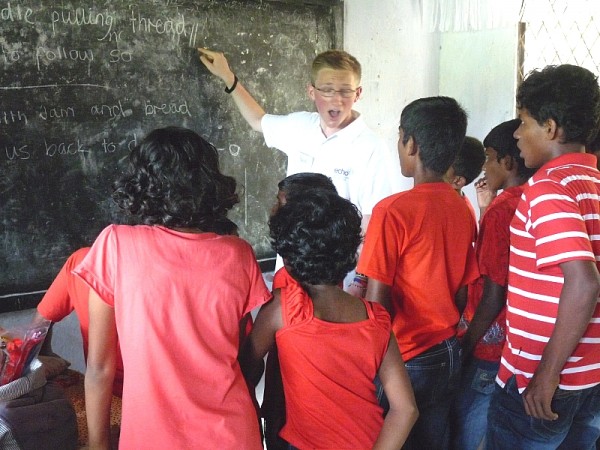 We taught morning classes at both Bembada and Nawala schools, but then everyone pitched up at Nawala for a lunch for the entire village and a game of cricket. “Team GB” – of course – lost.

Sally and Trevor sadly had to move back home to the UK. The Brighton College party moved from Unawatuna to Mirisssa, sightseeing in Galle before travelling to Weligama by train. The sun shone brightly on Sunday and everyone took advantage of the fabulous beach at the Mirissa Palace Hotel. 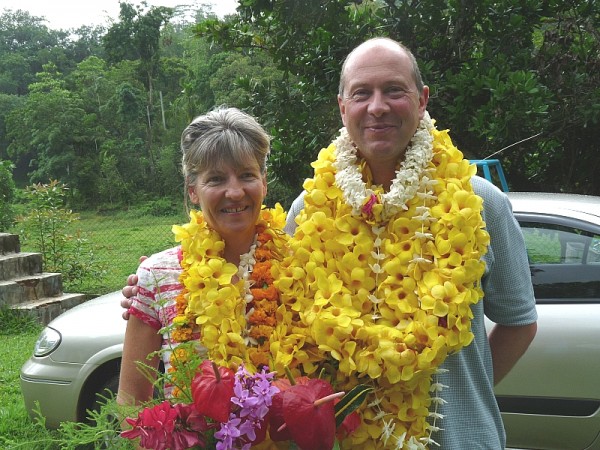 We began a two-day “Changing Rooms” programme, clearing and painting an upstairs activity room at Polwatta School. Other Brighton College pupils spent time in the classrooms, teaching a variety of subjects, and using their new-found skills to make their lessons age-targeted. Day 2 of the transformation took place during Trip 2.

Robert visited Navungala School earlier in the week (see article on “Five New Schools”) and today the entire Brighton College posse visited this wonderful school to run an English camp, not unlike that at Yatalamatta.

We had brought a large amount of “Arts and Crafts” related material with us from the UK, and today was spent using those resources to the full as we taught lessons at the 400-pupil Midigama School (where some former Nakanda pupils have migrated). Others got stuck in to more traditional lessons, immersing the Sri Lankan children into the English language while doing so.

Another day, another English Camp, this time at Midigama School. By now all the Brighton College pupils were “old hands” at teaching and the quality of their lessons and interaction with the pupils was truly professional. The day finished with another cricket match. Team GB lost – again. 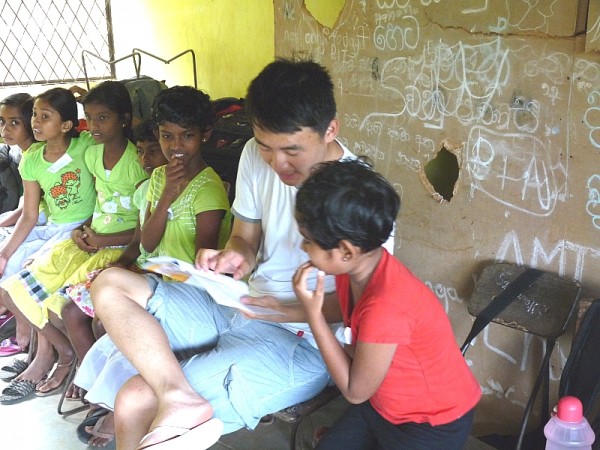 We made our way back up to Colombo, visiting the Madu River Safari, Turtle Hatchery on the way, before spending the evening charging around the city in tuk-tuks going to Odels and the Cricket Club Café for supper. The Chinese pupils flew to Hong Kong early in the morning … while the rest of the company (minus Fr Robert) took off for England at lunch time.

In a rather surreal moment, the Trip 1 pupils and staff sitting in the departure lounge at their gate saw the Trip 2 party arrive. Lots of exuberant hand signals and waving! We made our way down to Unawatuna, where the evening meal as cooked by hotel-owner Sassi was stunning.

While Robert celebrated Holy Communion in Galle Fort, the Trip 2 party slept. The day was spent getting over jet-lag and going for a swim in the Indian Ocean.

Trip 2 underwent an educational baptism of fire by starting their fortnight with a “Sri Lanka’s Got Talent” English camp at Gonadeniya School. No gentle “warm-up” here. To their credit, the day was a massive success. The schools’ open-air stage was used to full advantage with dances and plays galore. 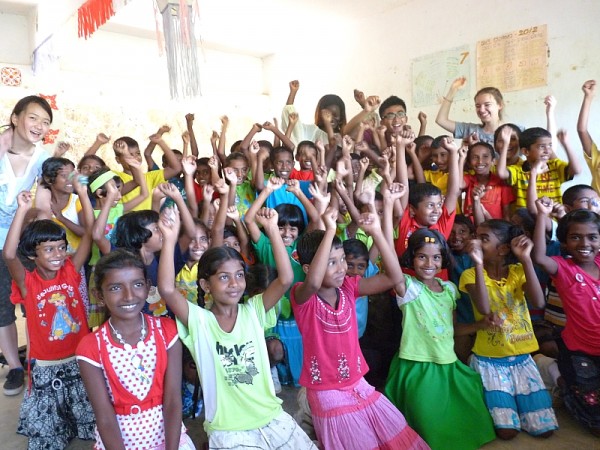 From the bustle and mild chaos of Gonadeniya to the comparative quiet of visits to two of the new schools – see “Five New Schools?”. A quarter of the group played at the one-room Watogala, while the rest taught lessons and painted furniture at the larger Ella Ihala. Both schools are very poor, very remote and very exciting to see hosting foreigners.

The College students went and worked on two different “tea gardens” in Pathawelivitiya. The work was hot and exhausting, but some terrific progress as made and all looks set fait for a first harvest later in the year.

An English Camp (of sorts) was celebrated at Nawala School, at which BC students used all their skills to teach to both Pre-Prep and Grade 11 pupils. The day finished with some netball coaching and the obligatory cricket match – at which (surprise, surprise) Team GB lost.

Extra Cover agreed to pay for children from a number of our schools to visit a nearby Tropical Rainforest – a far cry from their own jungle habitat – and Brighton College went along as chaperones. Caves, ancient trees and waterfalls were part of a fascinating long walk in Kenaliya. This was a wonderful outdoor lesson for all involved.

As with Trip 1, Brighton College moved from Unawatuna to Mirisssa, sightseeing in Galle before travelling to Weligama by train. Watersports were the order of the day on Sunday – the high waves proving a challenge to “surfers” and casual swimmers alike.

A return to Bembada for some to finish off the painting and decorating of the Pre-Prep (now all decked out in pink and blue) while others went a visited a brand new school for all concerned with Extra Cover – namely Gonalegoda – see “Five new Schools?” – where we taught some advanced maths to the older children and played English playground games with the younger ones.

A sort of consolidation day – most students spent the day in Mirissa, with the morning dedicated to sorting out our plentiful resources and writing lesson plans for the final two days of intense teaching, while others went out to various markets to buy materials, not least paint and posters.

Most College students descended upon Polwatta School where they continued on from the sterling work started by Team 1 on Day 7. The transformation was simply breath-taking.
Some six pupils visited three Extra Cover schools, where they handed out “dry rations” and played with the children while Extra Cover business was done.

Our last teaching day – exclusively at Polwatta – was a “Sri Lanka’s Got Talent” with a twist. Since Polwatta is a comparatively small junior school, we spent the first part of the morning teaching “horizontally”, followed by a quasi “Olympics-cum-English Summer fete”, with events including three-legged races, egg and spoon races, the long jump, and face painting. The day culminated with everyone receiving awards and sweets, and the singing of our respective national anthems. 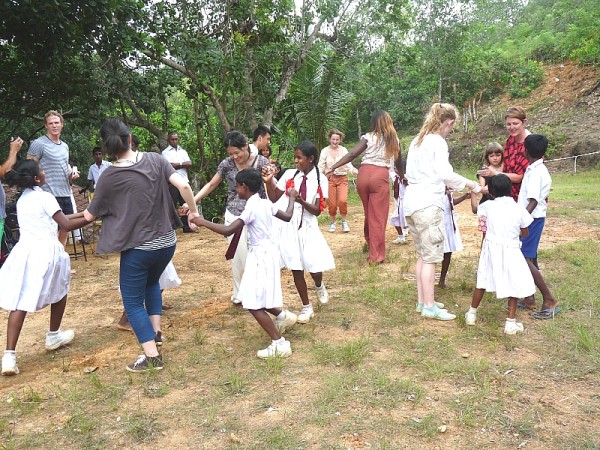 Back to Colombo via the Madu River Safari and turtle hatchery for a wonderful final evening out on the tiles.

After the best breakfast ever at the Galle Face Hotel, it was off to the airport and the long flight home. 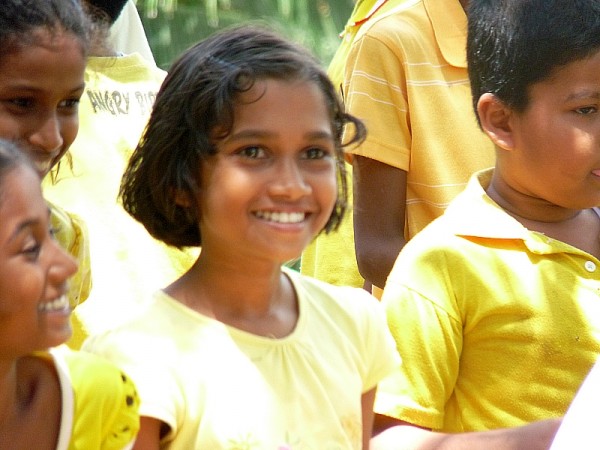