The village of Panangala may be a long way from anywhere – it’s a two hour slog from Galle, through winding and crumbling roads – but it is now a central hub for Extra Cover. A half hour journey from the town of Udugama and you reach what is now the Extra Cover Vocational Training Centre (VTC) for locals with leaning difficulties. A further ten minutes down the road and you arrive at Panangala School with its Special Education Needs (SEN) unit, entirely funded and resourced by Extra Cover as well.

While others might like to take credit, this is, in truth, the brain child of a 23 year-old woman called Chatumali, who pressed Extra Cover into considering opening a centre for people with learning difficulties where they could learn all-important life skills … skills that could possibly enable them to enjoy some level of independence, and even generate some income. With two teachers now employed by Extra Cover (Sunitha, who teaches at the Nawala VTC, now teaches sewing and handicrafts for three days a week and a man comes in for the other two days and teaches coir-making and basket-weaving), her dream is a reality. And perhaps beyond her wildest dreams. 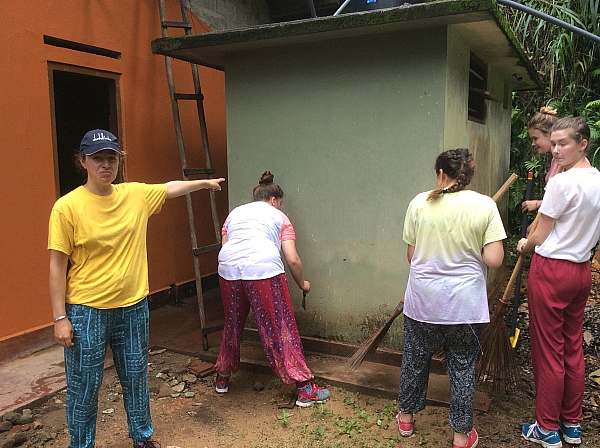 In July both Brighton College pupils visited the centre and painted the outside a bright “sunrise orange” and a couple of the interior rooms magnolia and brilliant white. The centre is now fit for purpose, and as of the end of August fully functional. 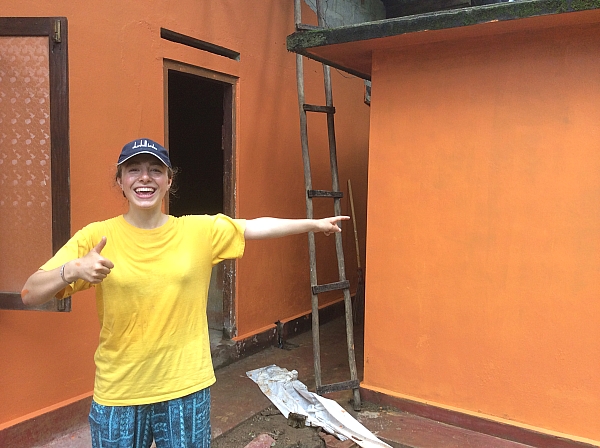 With resources and teachers in place, the main problem was that of getting the young adults to and from the centre. It is a time-consuming affair, not least because women must not share a tuk-tuk with men. But thanks to the generosity of some people in West Sussex, a solution has been found in the shape of the VTC’s very own tuk-tuk. The bright blue Piaggio will be up and running in early August and will ferry the students back and forth.
The quality of work produced by these students has to be seen to be believed. Robert has ordered his Christmas cards from the centre and it is likely that the students’ wares will go on sale at a weekly crafts market in Galle.
So who “wins” with such an unusual outfit now in place in such a remote corner of Sri Lanka? Well, the students of course, as they interact with others (often for the first time in their lives) and develop their vocational skills. Secondly the students’ parents who now have free time in the day to find profitable work themselves. Thirdly the teachers who have a steady income, and fourthly Chatumali herself who Extra Cover now employs as the day-to-day overseer and coordinator of the programme. It must be remembered that across Sri Lanka those with learning difficulties are widely considered a burden and a punishment for the indiscretions and sins of previous lives. In its own way, Extra Cover is quietly conducting a revolution to change hearts and minds, and to celebrate the potential of all human beings.

This school goes from strength to strength. The children are growing in confidence, thoroughly relishing each others’ company, and giving their parents much-needed respite. And the ongoing problem of transport (and transport costs) has now been solved with the provision of a second tuk-tuk, thanks to the wonderful kindness of Sussex donors. Bright blue like its cousin down the road at the VTC, this will ferry children to and from school, and no doubt increase attendance. Once again, Extra Cover finds itself to be something of an unwitting prisoner – challenging attitudes to those with learning difficulties not through words, but through action, through bricks and mortar, through bright blue Piaggio tuk-tuks, the unlikeliest of school buses, trundling through the jungle.