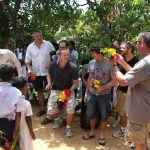 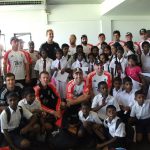 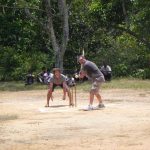 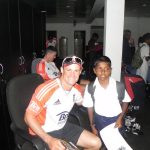 The English cricket team, recently out in Sri Lanka, took time out to help and support Extra Cover. The squad interrupted their warm-up for the test match against Sri Lanka in Galle to spend an hour or two with some of the country’s poorest children.

Coordinated by Matthew Hansford and Robert Easton, children from the remote Nawala Junior School travelled to Galle Stadium where Sussex County players Matt Prior and Monty Panesar, and the rest of the national team, chatted over tea, signed autographs and competed in a geography quiz conducted by ‘teacher’ Graham Swann. The 30 children were split up into 5 groups and 3 players were assigned to each group to help the children answer Mr Swann’s questions! Andrew Strauss, Stuart Broad, Kevin Peterson, Alastair Cook and all the others seemed to enjoy every minute, interacting through our able interpreters, and using I-Pads, Phones etc. to help the children. The smiles on the children’s faces showed very clearly how much it all meant to them, a once in a lifetime experience.
Matthew said it was a humbling privilege to see all of the England players “mucking about” with children from such desperately poor backgrounds. “This is a fusion of two of my passions,” he said, “cricket and Extra Cover. Every single member of the England squad and management has been amazingly generous.”

Members of the support staff, including team coach Andy Flower and batting coach Graham Gooch, had spent the previous day visiting two of the Extra Cover schools, where they took part in a cricket match using tennis balls on one of the craziest cricket grounds, where the cover boundary was 30 feet up over a cliff edge!! The teams played for the Halsall cup (Richard Halsall is the England fielding coach who kindly made these days possible) They were then treated to a wonderful lunch and then visited some to the families who are growing tea, funded by Extra Cover.

“Both the children and the touring squad were winners” Robert said. “This was a once-in-a-lifetime experience for pupils, and a positive opportunity for the players and their staff to focus briefly on something different, important and really rather wonderful.”