Martin and Mary Riddiford visited Nawala School on 19th February 2013 where 20% of pupils’ homes have no electricity and kerosene lamps are used for lighting. Extra Cover arranged visits to 3 of these homes, and to meet the families.

Martin is the driving force in developing a real alternative to Kerosene lamps in the developing world.

Martin reported “I brought a GravityLight prototype to Sri Lanka to get first hand feedback and reaction to it as a replacement for kerosene lamps. In particular I wanted to get insights on how & where it might be fitted, the ease of finding suitable material to fill the weight bags, and whether its use pattern would be acceptable.

First we had a demonstration of a typical kerosine lamp, which usually consists of an old medicine bottle, and a metal lid pierced with a hole for the home-made wick made from a strip of cloth. Filling it involved lots of spillage. Lighting it with a match produced a yellow flame, giving the light equivalent of a candle, and a lot of smoke. The well known hazards include the significant danger of it being knocked over and potential lung damage from the smoke. 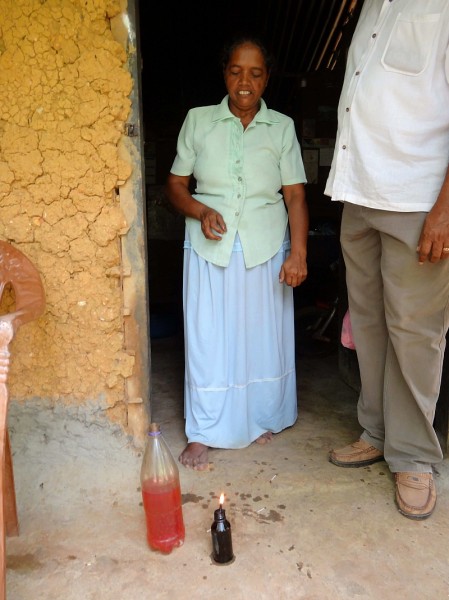 Typical usage was reported to be 3 kerosine lights, one kept alight throughout the night. This level of usage costs about 500 Rupees per month. This is a significant amount of money for these families.
The GravityLight prototype was set up, hanging from a roof beam, which was easy to get at as it was exposed under the tiles. The beam proved to be plenty strong enough to easily support the weight of the GravityLight. The approximately 10kg weight which powers the light was made up from the plentiful supply of rocks around the house, loaded into the bag.
It was difficult to fully assess the amount of light that the GravityLight generated as it was daytime, but we know that when it is completely dark, even a small amount of light makes a big difference. It was certainly a lot brighter than the kerosine flame. I also demonstrated the ability to add a task light to the GravityLight, which enables a more focussed beam to be used for reading etc. 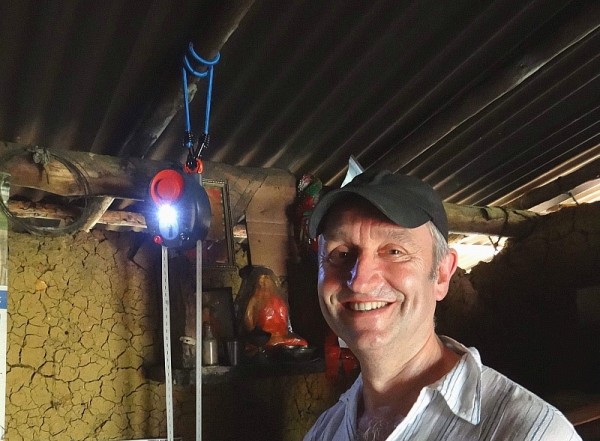 The weight needs to be lifted every 15 to 30 minutes to recharge the light. Everyone who tried was easily able to lift the weight. The insight gained from how kerosene lamps are used, and a typical house layout has enabled us to firm up our thinking about providing a wired-in lighting system, rather than just an ambient light.
The intention is that the basic, lowest cost GravityLight will have a built in LED light, for general illumination. It has screw terminals which enable a wire to be connected with several additional LED lights along its length for additional ambient lighting, at the end of which is a more powerful light to be used as a task light, which can be hung over a table, or pointed like a torch. Although the light level is still low, it is far better than the kerosene lights it seeks to replace. This should enable the family to do more in the evening – including reading and learning! This set-up should be able to replace the 3 lamps which are currently used. We are researching whether GravityLight can provide a very low level night light too.

We are planning on completing the design and development by April, and hope to be manufacturing the first trial batch in the summer. We will be gifting units to organisations, including Extra Cover, around the developing world to get feedback from real life use and abuse before committing to full scale production.
Our goal is to make GravityLight as low cost as possible, but still to be robust enough to survive years of use. It is likely cost about the equivalent of 2 to 4 months kerosene usage, depending on how it is distributed. After that, the light is free…”